Saturday brought the perfect long weekend weather to get out to a popular exhibit.

Everyone and his uncle thought so too!

I mustered up the courage to match my curiosity. I really wanted to see the MosaiCanada150 exhibit in Quebec. The last time I pushed myself to attend a crowded cultural event was in July.

With water bottle, granola bars and sun hat ready yesterday, I set out on public transit to cross the river to la belle province – specifically to Gatineau, Quebec.

The Jacques Cartier Park lineup to get in and past security was very long. I didn’t realize until after I took what looked like a clear passage on a side road that I was cutting into the line. I apologized to the people beside me, using my confusion as an excuse.

It was an impressive exhibit.

There were dozens of sculptures artistically made with plants, depicting different stages in Canada’s history. The exhibit took us back in time to the First Nations, the voyageurs and early settlers.

Due to the crowds of people in the way and my short stature, I could not find the time or patience to stop and take photos of all the displays. I adored them with my eyes and stored the images, my reaction and appreciation for them in my short-term memory bank. 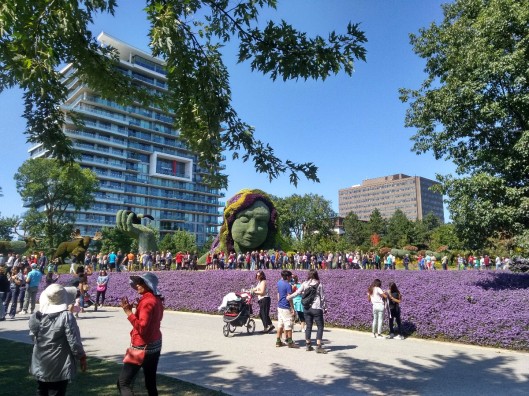 The main attraction, pièce de résistance was Mother Earth. As I took shaded shelter under the trees before merging into that long queue, I overheard a security guard saying to people resting on the grass,  “Move faster. Move faster!”

I can understand that they wanted to keep bodies moving and make room for the hundreds of others waiting at the entrance. It just seemed ironic that we were being rushed and not allowed the time to stop, to reflect and appreciate the magnificence of the scene.

It was ironic to see Mother Earth set with a backdrop of high-rise buildings. Perhaps it was complimentary in that we can learn to balance our desire for progress and modern expansion with a respect for nature and the ancient traditions. 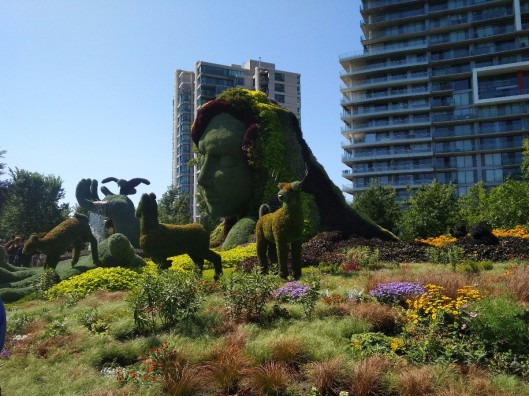 Mother Earth in the city

Did I achieve my objectives?

Today it’s raining. I shall stay in my humble home to putter with houseplants, to reflect and write, to cook a batch of meaty pasta sauce.

I changed the C cell batteries in my Zen Alarm clock. Once again it makes a loud and proud chime in the key of E rather than a dull thud. It had been almost three years since I coveted and acquired it.

When I look back at my observations, writing and personal growth since then, it seems that things haven’t improved in our outer world.  It’s like we’re stuck in some ambitious, testosterone-fueled cycle. I know I have been working on myself. What about the rest of the world, for Pete’s sake?! 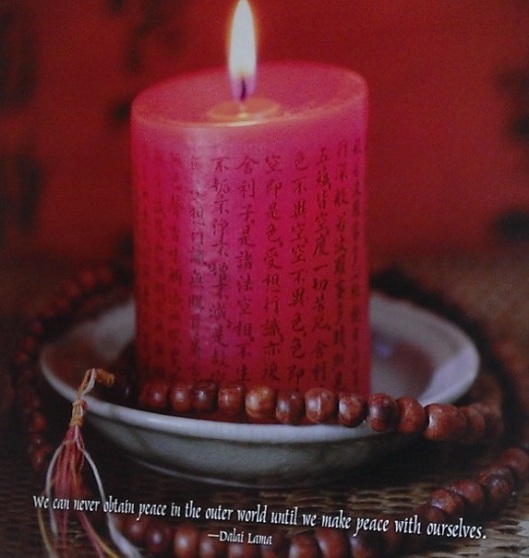 I changed, edited the quote on that poster from:

“We can never obtain peace in the outer world until we make peace with ourselves.” — Dalai Lama

“We can only obtain peace in the outer world once we make peace with ourselves.”

I felt the quote could use a positive injection – for so many reasons.