What did you enjoy doing when you were a child?

Did you like to run and play ball in your big backyard or in the park with other kids? Did you like to colour, to play in the dirt or puddles? Did you try to run away into the nearby forest but return home in time for dinner?

I think that the age range between 8 and 11 years old is one of innocence, adventure and discovery.

This deep thought has been brought to you by page 106 in a book of daily inspirations. I think it is a good reminder for ambitious, jaded adults.

…except for the part about pooping in your pants.

When I was ten, I enjoyed playing in big puddles, engineering canals and small towns. I enjoyed playing with Barbie dolls, playing school with my siblings and friends.  I enjoyed drawing pictures. As I matured, I had dreams of creating greeting cards or children’s books.

I didn’t care about fashion or boys. I didn’t know our family was poor. I was oblivious to the inhumanity happening in our country, in our world.

I didn’t even know I was fat until it was pointed out by a friend’s older brother.

Last summer, I travelled to meet my four older sisters during a pilgrimage of sorts to our Mother’s place of birth.

Last month, I travelled with my oldest son to mine. Our journey was a combination of planes, trains and automobiles. We got along well for most of the long weekend. We had budgeted well for comfy travel and a three night stay at a lovely Bed and Breakfast.

It had been many years since I spent more than one or two nights in that small town other than to attend weddings or funerals. This time, the occasion was a family reunion being held in an eatery along the main drag.

Prior to catching up with the twenty or more people who attended, my son and I had plans to play tourist for a couple of days. Well, I had plans. He was along for the ride.

The first day, a neighbourhood cat greeted me during his morning tour while I took in fresh air on the B and B’s front porch and waited for the coffee announcement.  I was happy to meet a black feline who reminded me of one of my own back home.  He was a very friendly fellow with all the purring and rubbing but wouldn’t stay still long enough to look at the camera! He had an outdoor cat coat which was much coarser than that of Mr. Snuggles. He also had well-sharpened claws which made it difficult for lap sitting.

Neighbourhood cat drops by the B and B to say hello

I went in to obtain the first cup of fresh-brewed coffee. While sipping it, ahh-ing and admiring the dining room deco,  I looked out the window to see that my new friend was waiting for me. It was cute yet a little creepy…

Black cat waiting outside. I think he sensed I was a Cat Lady

After breakfast, my son and I went for a walk with intentions of visiting the used book store and a few other places. He sighed when I indicated a plan to take on that lookout tower on the opposite hill.

We shall venture to that tower on the hill this weekend!

I reminisced beside the lazy river that meandered through our old town. In my early days, I used to paddle a canoe up and down that river, exploring the shores and meeting friends.

Reacquainting with the Seguin River

On an impulse decision, I agreed to a 25-minute float plane tour of Georgian Bay rather than a 3-hour boat cruise. My other travel companion was excited about the chance to take to the air.

Owlie says “We’re going up in THAT?! Kinda small, isn’t it?”

The airways tour was exciting and beautiful, providing a quick aerial view of Georgian Bay. I made sure to snap plenty of pictures with my trusty little camera. This wasn’t the first time I used it to calm my anxieties about flying in a small plane.

Before we knew it, we were approaching the harbour again.

Salt pile on the shore

We made a very smooth landing then puttered back to the docks.

Returning to the docks after a smooth landing

The next day was rainy and breezy. We applied appropriate footwear and an extra layer of clothing to walk around the old neighbourhood and climb tower hill. I felt obligated to provide proof to family and old friends that we had visited this landmark.

Lookout tower view from base

Although I had been up and down this structure many times in my youth, the rain, wind and my weaker knees made it a new experience that day.

You will notice the CPR train trestle appears in many of my touristy photographs.  It was an ever-present landmark looming over our old neighbourhood and spanning the Seguin River valley.  Many others will agree that since we were surrounded by the CPR and CNR routes, trains were a big part of our childhood. During my recent visit, I found the frequent sound of the train whistles comforting and nostalgic. After three days and nights, the charm soon wore off.

Meanwhile, back at the top of the windy lookout tower, we quickly scanned around to confirm there were no forest fires then gingerly made our way back down the see-through metal steps. Conveniently, the Tower Hill museum and gift shop were open that rainy Sunday afternoon.  We only had enough time to purchase souvenirs then go in search of lunch.

I insisted we visit the restaurant that provided inspiration for The Red Hare in The Year of the Rabbit, a novel that took place in a small town very similar to Parry Sound. The bowl of hot wonton soup was very comforting.

When we returned tired and wet at the Bed and Breakfast, we were greeted by that neighbourhood cat. Once again, I could not convince him to stay still in order to get a good profile pic.

Phillip the cat welcomes the wet, tired tourists back

Third time’s a charm, he appeared on the morning of our departure, likely to see us off – or request a chin scratch and tummy rub. 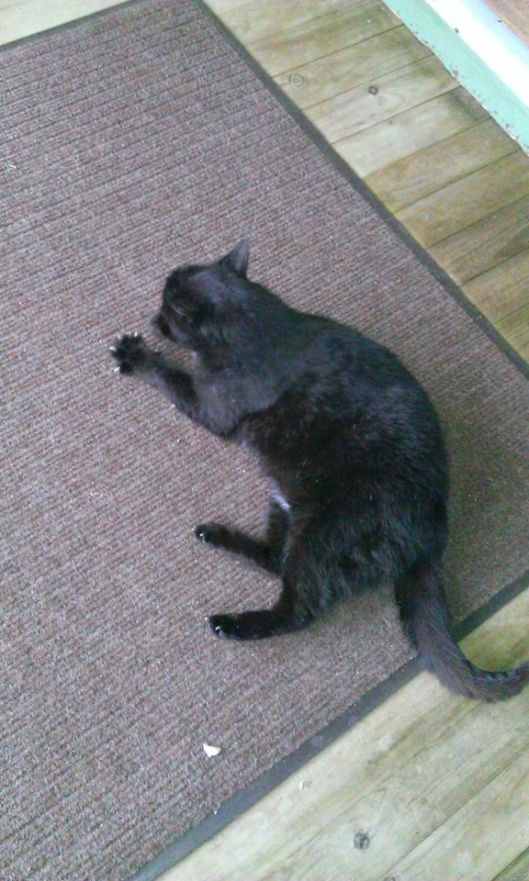 After a long journey of sitting, waiting and connecting, we arrived home. I was happy to see my other children. Some were happy to see me too. 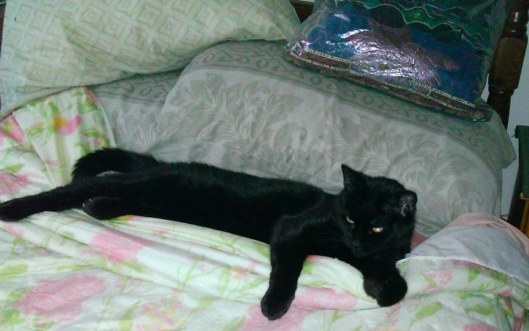 I have settled back in to my weekly routine. I can reminisce about the visit and the brief family reunion while I sip cool water from my souvenir Macintosh Grande mug graced with the lovely Casson “White Pine” painting.

Thanks for dropping by.  If you’re feeling adventurous to read that novel I mentioned, please visit Smashwords to download a sample of the ebook or eventually purchase a copy. It’s only 99 cents or you can pay what you feel is a fair price. It’s okay, I didn’t write it to make money, only to share a story. If you enjoyed it, mention it to others.

I should be thankful that my parents didn’t use birth control.

As the 11th surviving offspring of their traditional union I may not have made it here if they chose not to marry, or if they defied the rules of the Catholic Church and enjoyed intimacy without the worry of more mouths to feed.

I think they and the few lucky offspring would have been A LOT happier and less wanting.

Well, they made do and most of us turned out okay.  A French relative referred to our family as débrouillard. That term followed many of us through our adult lives as we coped with limited resources.

During a research quest this summer, I harvested the following from older relatives on my parents’ encounter in Québec City, their subsequent letter-writing courtship and eventual marriage:

In comparison though, we all knew the Apostles’ Creed, Hail Mary and Our Father by memory. As one of the younger brood members, I was spared from Saturday evening Rosary sessions. By that time, I think our parents were preoccupied.

At least the younger brood didn’t have to learn the mass in Latin!

My brothers survived as altar boys with no visible scars or horror stories (at least that I know of).  Altar girls or “altar servers” were only allowed after 1983. A little too late for me.

Those who could not grasp la langue had limited career opportunities if seeking jobs with the Federal Government or many private sector employers in the National Capital Region.

Four observations from a lapsed Catholic:

As I embrace my roots, explore the fractal branches of our family tree and honour my parents, I welcome the opportunity to parler la langue with colleagues and new friends.

If you share similar childhood memories or scars, you will appreciate how Sera Fletcher rebelled at attending Sunday mass.  You may also appreciate her simplistic approach to belief systems and coping with loss in The Year of the Rabbit – A Novel About Fate, Family and Forgiveness.

My Tweets
Join 145 other subscribers